Make a beer candle with gel and whipped paraffin wax

Our visitors from Belgium know it: "the more you taste it, the more it suits your taste!" And for our foreign friends, here's a chance to discover one of the prides of Belgium: the beer. And not any kind of beer, since today we're going to make a Kriek Belle-Vue (a light cherry-flavored beer, hence the name).

Candle gel is great to mimic the freshness and transparency, sprinkled with bubbles, of beer. And if you didn't know it yet, paraffin wax has the little-known advantage that it can be whipped, just like egg whites, and that it perfectly imitates beer froth. We don't need much more to start this project...

and of course the usual supplies, like a double boiler, a small pan for the gel and melting pots...

As the saying goes, you should never judge a book by its cover. But in this case, it's the cover that counts.

So try and make sure you use the glass that would normally be used to serve the beer you are about to «brew». Unless you're replicating a very obscure, artisan beer, finding the matching glass should not be a problem: thrift stores carry a whole range of original beer glasses for less than 2 euros. And a lot of stores have actions where you get a free glass if you buy a six-pack of a specific beer. A great opportunity to add to your collection.

Wash the glass thoroughly in soapy water, wipe it dry and make sure there's no trace of soap or finger prints left, either on the outside or the inside. 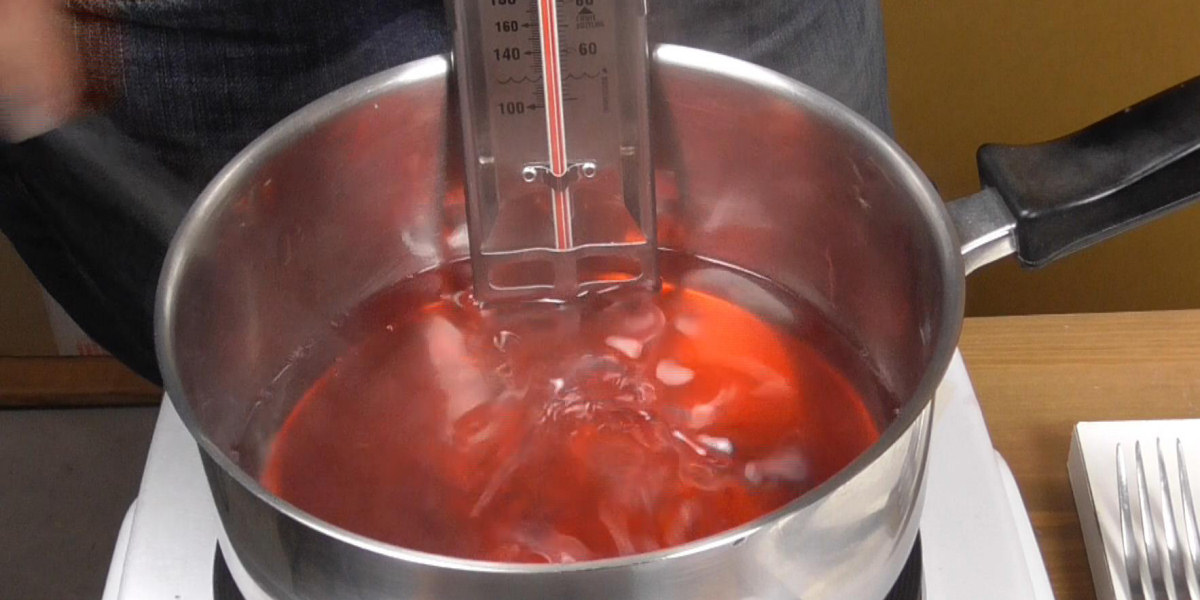 In a small pan placed directly on the heat source on a low setting, slowly melt the gel that you have previously broken up into small pieces with your hands or with a pair of scissors to make it melt faster and more evenly. Don't forget to place a thermometer in the pan from the very beginning, so that you can keep an eye on the temperature of the gel: it should never raise above 230°F.

Once the gel has completely melted, color it a vivid red. Start with a small amount of dye and add in small increments until you get a color similar to that of your model.

In this case, don't be afraid to stir the colorant and the gel with a spoon really well: this will create bubbles and these bubbles are welcome in this project; the last thing you want is a flat beer... 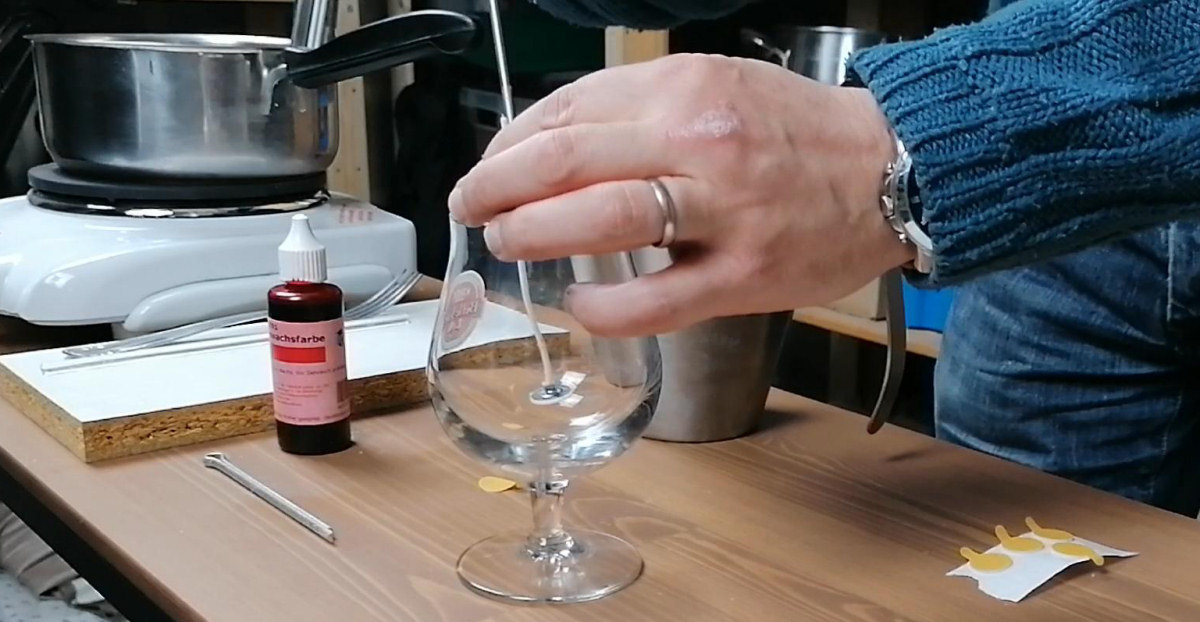 Once the red dye is thoroughly mixed, turn off the heat source and allow the temperature of the gel to drop to around 185°F. 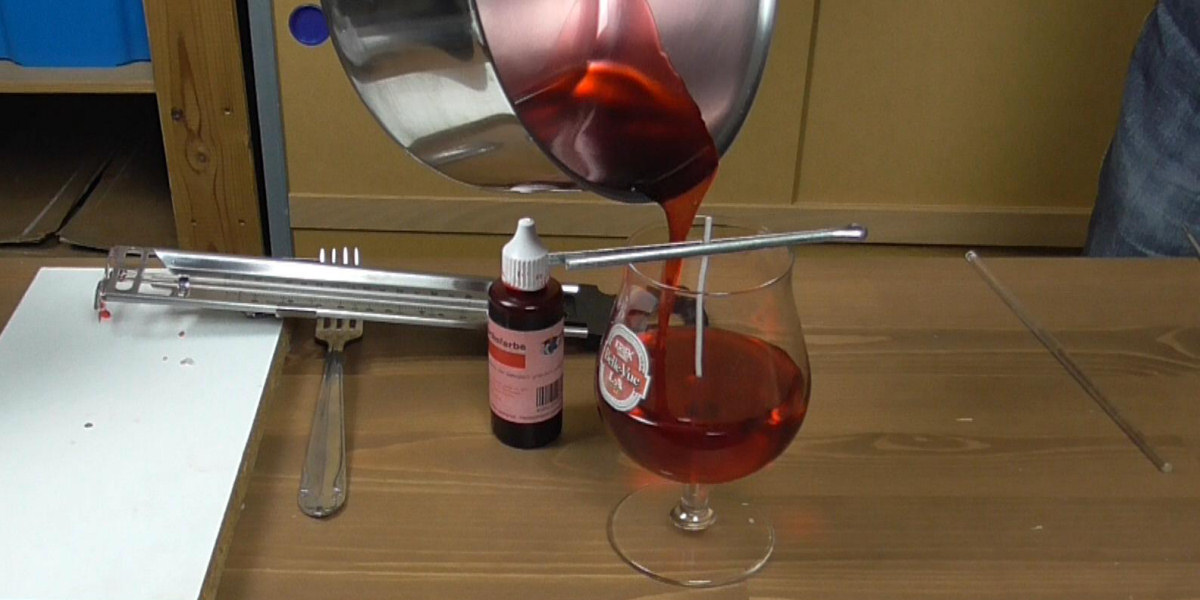 After you've checked that the temperature of the gel is still close to 185°F, fill the glass with gel until you reach the top of the logo (in this case, the top of the barrel).
The remainder will be filled with foam, just as tradition would demand.

Give the gel plenty of time to cool off (3 hours is about right). If you don't know what to do during that time, you are now allowed to drink your model.

Once the gel has cooled completely, the time has come to take care of the froth. Use a double boiler to melt the paraffin wax (without any additives) in a small melting pot.

As you probably noticed, the froth on top of beer mirrors some of its color: a Guinness, for example, a very dark beer, has a slightly brownish foam. The Kriek in our example is no exception: its froth is pinkish but certainly not white. To reflect this, let's color the paraffin wax that will pose as the froth a very light red.

Because the color of paraffin wax is always more vivid in liquid form than when it cools off, add a little more red dye than seems necessary. In these pictures, notice how different the color of the wax is in the melting pot and on the finished candle. It IS the same wax and the difference is not caused by a camera issue.

Remove the paraffin from the double boiler and let its temperature drop until a film starts appearing on the surface of the wax: it's a sign that it's about to leave the liquid state and the perfect time to whip it like egg whites.

Holding the melting pot firmly with one hand, whip the wax vigorously with the fork (it may be a good idea to wear safety glasses, just in case you're being a little too enthusiast). What you're aiming for is not a real foam consistency but somewhere between liquid and foam. You must be able to pour it in a moment.

When you're happy with the result, gently and slowly pour the froth on top of the gel, up to the rim of the glass.

Even at this low temperature, a (very light) sink hole might appear around the wick. If that's the case and it's not too bad, leave it be. Otherwise, melt the paraffin wax again, let it cool off, whip it and fill the sink hole. 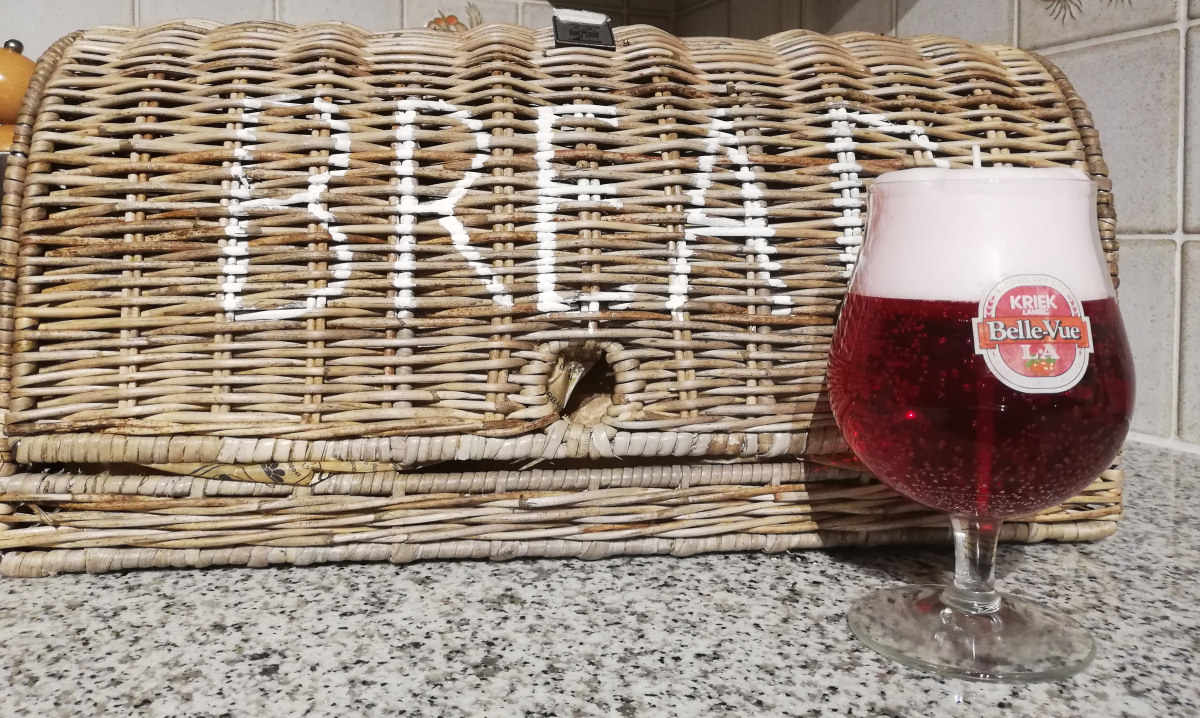 Don't worry if the froth seems very red after you've just poured it. The color will fade as the wax sets and you will be surprised at how it looks exactly like real beer froth.

I hope this easy project will inspire you to recreate other types of beers, there's an enormous choice out there. And such a candle makes a nice gift for your beer drinking friends.