3 easy surface techniques for your candles

As this article is about to show you, you don't need much to radically transform the appearance of a candle.

There are many surface techniques (techniques that have an influence on how the surface of your candles looks like) and you're about to learn three of them.

I picked these three techniques because they give candles a dramatically different look with very little effort. 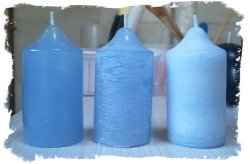 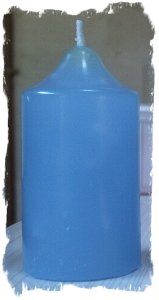 Most of the time, a molded candle will automatically have a shiny finish, mainly because of the relatively high recommended pouring temperature (176°F to 185°F).

The rule of thumb is: the hotter the wax and the faster it cools off, the shinier the finished candle will be.

So if you want to achieve a shiny finish, pour the paraffin in the mold at a temperature ranging between 176°F and 185°F and, if possible, speed up the cooling process by immediatly placing the mold in a water bath.

When it pops out of the mold, your candle will have a shiny aspect, just like the candle in this picture.

You can accentuate this effect even more by wiping it gently with an old nylon stocking.

Because of the relatively high pouring temperature, the wax will shrink a lot. Don't forget to poke relief holes along the wick as the wax cools off. 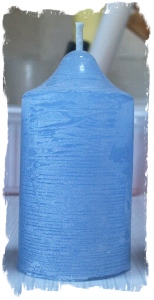 This technique, which gives your candle a superb rustic look, is the exact opposite of the previous technique.

As a matter of fact, to achieve this effect you will need to pour wax in the mold at the lowest temperature possible (depending on the paraffin blend used, around 140°F or less). You can also wait until a film starts to form at the surface of the wax in the melting pot: it's a sign that the wax is about to return to a solid state. This is the perfect time to slowly pour it into the mold.

Because the mold has not been preheated and the paraffin is at such low temperature, by pouring very slowly the wax will immediately set when it touches the sides of the mold. This creates a multitude of pale horizontal lines, also called jump lines.

Furthermore, when you unmold the candle, parts of the surface wax may remain stuck against the sides of the mold, thereby accentuating the candle's already distressed and dry look.

Experience will show you that you will get better results with some colors than with others. Dark colors seem to work better for this technique...

The disadvantage of a cold pour is the high potential for air pockets forming inside your candle. To avoid this, you can use the "shell" method.

Do exactly as above but as soon as a thick (at least 7mm) wax shell has formed along the sides of the mold, break the surface film if necessary and pour the wax back into the melting pot. Then, bring the wax in the melting pot to a temperature of about 158°F and pour it back into the mold. The wax shell should be thick enough to resist this new pour and still have its rustic appearance. 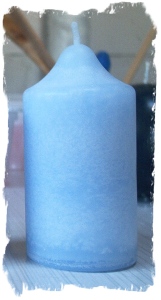 This third technique gives a candle a very soft, almost cottony look which is called mottling in the candlemaking world. It creates a pretty snowflake effect just under the surface of the candle, unlike the previous technique that actually acts on the surface itself.

To achieve this very nice effect, you need to know three secrets:

If you're using a metal mold, don't forget to preheat it (in a low-temp oven or with your faithful heatgun).

Pour the wax into the mold; as soon as it's hard enough to flip the mold upside down without spilling any wax, wrap the mold in one or two old bath towels to keep it warm and give the candle all the time it needs to completely cool off (the longer the better).

Unmold the candle: you will notice a great snowflake effect on its whole surface, as showed on this picture.

Never use Vybar when you want mottling to occur: Vybar will bind the mineral oil to the wax and that's exactly the opposite of what we want.