Vybar is a polymer. A polymer is a high molecular weight organic compound, natural or synthetic, whose structure can be represented by a repeated small unit, the monomer (eg, polyethylene, rubber, cellulose). Synthetic polymers are formed by addition or condensation polymerization of monomers.

Vybar is developed and patented by Baker Hughes. Dozens of variations exist, targeted at different industries. Four of these variations are formulated specifically to be used in candlemaking. 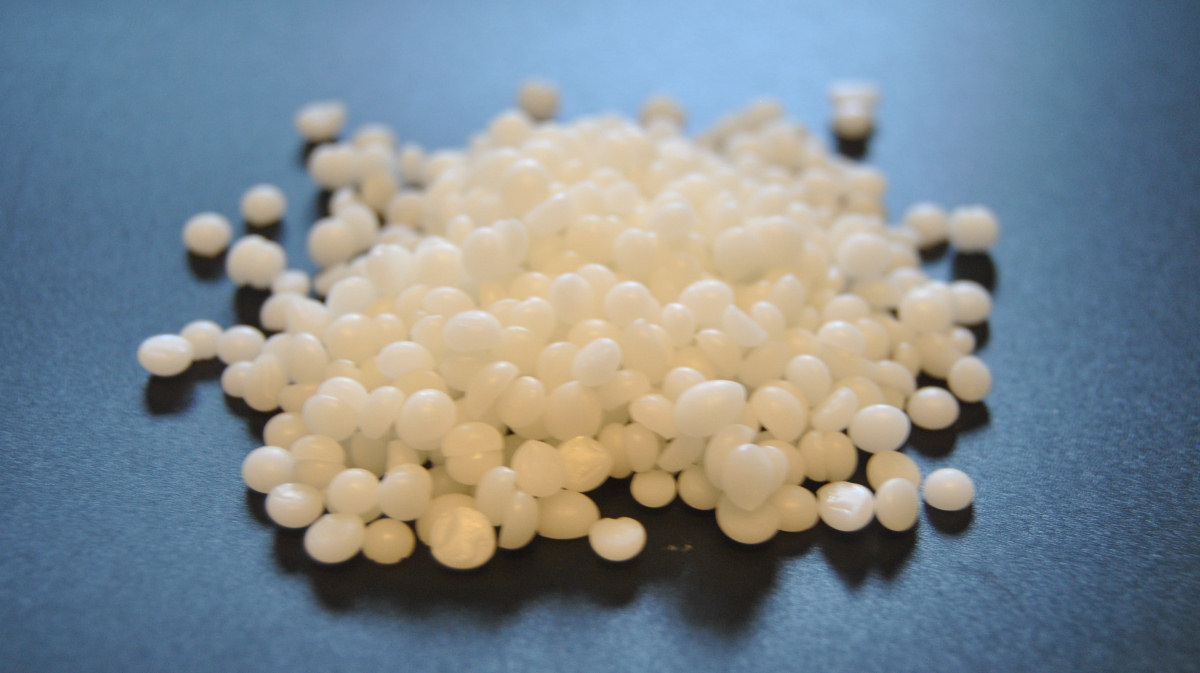 In the first version of this article, written more than twenty years ago, I was talking about Vybar in the singular form, for the simple reason that there was only one version available to candlemakers back then. Nowadays, I should be using the plural form but honestly, I don't think I can get used to that

So just remember that different versions of Vybar are available and always use the version that fits your candlemaking project best.

What are the advantages of Vybar?

Vybar has some very desirable effects when you add it to paraffin wax when added Among those:

To add scent to a candle (this is explained in details in the article about Candle scents), you add a certain amount of fragrance oil to the wax. Paraffin wax, due to its chemical composition, only allows for a limited amount of additional oil. The classic proportion of fragrance oil is 1 ounce (28,35 grams) per pound (450 grams) of paraffin but, as 1 ounce is considered by the industry as "double-scented" already, the actual "basic" proportion is 1/2 ounce per pound.

When you visit the website of a candle vendor and see they describe their creations as being "double-scented" or "triple-scented", what they actually mean is that the wax they use contains respectively 1 ounce and 1,5 ounce per pound of paraffin wax.

To bind such an amount of fragrance oil to the paraffin, it is necessary to add a binding agent. This is where Vybar plays an important part.
But caution is required here: too much of this additive and the fragrance oil will become bound so tightly to the paraffin that the scent will be neutralized, properly imprisoned into the wax (which is not the result you are looking for). If you have trouble achieving a strongly scented candle, try and decrease the proportion of Vybar used. 1% is a good starting point. To find the ideal proportion, a little trial and error is unavoidable!

Vybar as an alternative to stearic acid

Vybar is commonly used to replace stearic acid (stearin) whenever the use of the latter can cause issues, for example in combination with flexible molds that can be damaged by the acid.

Vybar and mottled candles
Mottling - or the snowflake effect - is a very popular surface effect which is the result of a high level of oil in the wax and a very slow cooling process. But one of the advantages of Vybar I mentioned earlier is the elimination of mottling, which is obviously the opposite of what you're trying to achieve. So in this case, it's better to not use any Vybar or, if available to you, replace it with the version that is specially formulated to reconcile the other advantages of Vybar and the snowflake effect, Vybar 343.

What type of Vybar should I use?

As mentioned earlier, there are four variations of the polymer made to be used in candlemaking even though you'll probably ever need and use one or two of them.

Some suppliers offer a candlemaking additive called Vybar 3451. Unfortunately, I wasn't able to find any information about it. It is not mentioned on the Baker Hughes website.

To wrap this article up, know that competitors to Vybar exists under the names Polyboost and Bipol-X. I have not tested these alternatives but if they are available to you, why not give them a try. According to the manufacturer, they are supposed to have the same effects on paraffin wax than the original. Polyboost is available in two versions, for low and high melting point paraffin waxes.
Do you like this content? Help me write more by offering me a coffee